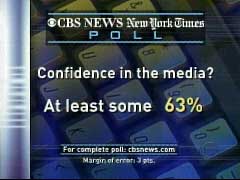 In late January 2006, a CBS News/New York Times poll asked 1,229 adults about their attitudes toward the news media as part of a 'State of the Media' segment on the CBS Evening News. The poll found the public's view of the media divided by partisanship, with self-identified Democrats most confident of the media's ability to report news 'fully, accurately and fairly' and 'tell the truth' all or most of the time, and Republicans expressing much more skepticism.