One of the most comprehensive surveys of the public's general opinion of the media was done in 1997 by the Pew Research Center for The People & The Press, formerly known as the Times Mirror Center for the People and the Press. This research compared poll results from the mid-1980s with the late-1990s, (using identical questions) and determined a growing percentage of the public realize the media are biased, inaccurate and an obstacle to solving problems. 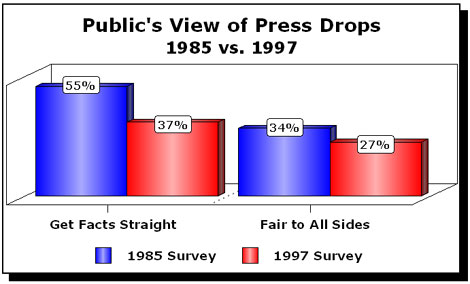 Previous: Exhibit 1-19: Indiana University Polls of Journalists
Next: Exhibit 2-2: What the People Want from the Press